How to Deal with Dementia Hallucinations and Delusions in Elderly Parents

How to Deal with Dementia Hallucinations and Delusions in Elderly Parents

“There’s something in this room, it’s like a bug. I can hear it. I can feel it crawling on the couch, what is that? Get rid of it. I don’t want it to turn out the lights!”

“Where is my plate? I left it right here. Someone stole it. There is someone in the house that stole my plate and is trying to poison me!”

These are common scenarios that represent the warped perceptions of those suffering from dementia hallucinations. You may hear your parent suddenly insist that someone is there when they clearly are not, or that something has happened, when it clearly didn’t. These are common symptoms of dementia and it’s vital for you to understand what they are and how to deal with them.

What Is The Difference Between A Hallucination and Delusion

Dementia hallucinations and delusions are both common and while they are both false, they are very real to the person experiencing them.  They are caused by an abnormality in the person’s thinking.

There are several types of delusions:

How To Deal With Hallucinations In The Elderly

It is impossible to stop or to control dementia hallucinations and delusions. They are simply the result of an impaired brain trying to make sense of the world. These are very real to the person experiencing them and there is nothing you can do to eliminate it or prevent it from happening.  However, understanding how to deal with dementia hallucinations when they come up can put everyone at ease. Always remember the three R’s: Reassure, Respond, and Refocus.

Resist the need to control or correct. If they are not causing a problem with their dementia hallucinations or delusions, try letting it be. When someone is having a delusion, they can not be reasoned with, and no matter what evidence you provide to the contrary, there is no breaking that belief. Support them, show respect and just let them be.

For Example: My father frequently had a hallucination about his building being on fire. You cannot effectively convince someone who sees and smells fire, that there isn’t one present. So, we would simply redirect him to a “safe” room and tell him the firemen were on their way. After a few moments, we would tell him they put out the fire and that it was safe to return. This was very effective. Sometimes you have to be creative in your approach. Flexibility is crucial.

Make sure the environment has enough lighting, not too many distractions, and is free of concern. Offer reassurance in a calm environment to assure your parent they are heard and understood and taken care of.

For example: My father had a horrible episode one night and believed a man that lived in his memory care community was trying to kill him. He was very agitated when I arrived. I removed him from the area and took him back to his room where I talked with him about other things for about 20 minutes. There was a moment I saw a change come over him and he softened, he totally forgot about his delusion and we went back to the dining room and had a pleasant dinner. If the person suffering from delusion is too angry, just give them some space, and come back to them after a while. Take an approach/retreat tactic until they are calm. 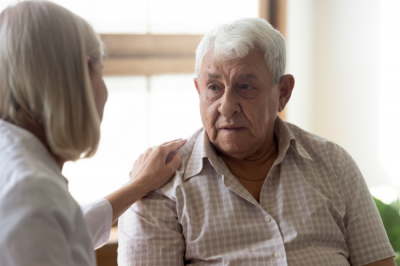 In this case it is best not to argue because you simply cannot win and aggravating someone with dementia will only lead to a worse scenario. Try to divert their attention elsewhere. Remember the disease is causing this, and don’t take anything personally. Diversion here can work.

For example: If your parent is concerned that they are being watched by someone outside the window, let them know you want to address their concerns. Ask them if they could help you with something else first and then they can see if someone is watching them. If you’re lucky, they may forget for the moment about their frustration and return to a calmer mode.

We Have Your Back

Dementia hallucinations and delusions are a symptom of a brain playing tricks as the cells degenerate. This miswiring can be difficult to watch and even harder to cope with. You don’t have to go at this alone. If you are struggling to cope with a loved one who is suffering from dementia hallucinations or delusions, give us a call. We can offer advice on how to put them and you at ease.

If you need help finding a memory care community, we can help with that too. Contact us today and we will find your loved one a home both you and they will love.