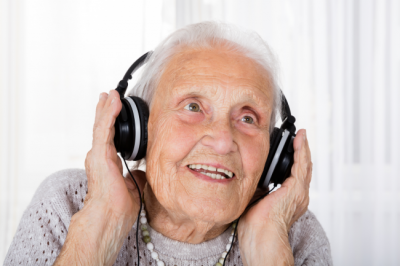 When words fail, music speaks. This is especially true for loved ones suffering with Dementia or Alzheimer’s. Music has been shown to connect with individuals in a way that words cannot. Several studies show that music therapy for dementia is able to evoke response or a memory in people with memory loss. Your mother may not be able to tell you what she had for breakfast, but she might sing every word of her favorite song every time she hears it.

Music is a universal language, but it goes far beyond simply listening. Music has a close relationship with unconscious emotions. When the conscious mind is compromised, music can reach the subconscious.

Music can be used in so many ways and for so many purposes in Dementia therapy. The music itself can actually transport these patients to a happier place and ease the anxiety and agitation they live with on a daily basis. Benefits of music therapy for Dementia patients may include:

There is a strong connection between the brain’s auditory cortex and emotions. This biological link makes it possible for sound to be processed almost immediately by the areas of the brain associated with long-term memory and the emotion.

For this reason, the best music to play are songs that were once enjoyed during their earlier life. Obviously, this would be different for everyone, but here is a brief list of some of the more popular tunes for those who grew up in the United States in the early 1930-1940s.

The organization Music and Memory filmed a documentary about music therapy for dementia patients and how music specific to their youth can literally rewire their brains. In this documentary, we met a man named Henry. He sat with his head lowered and barely grunted in response to questions. When they provide earphones and play the music he loved as a younger man, he sat up, eyes opened and he started singing. After just a few minutes, they removed the earphones and began a conversation with him. Amazing!  The music had allowed them to reach a part of him that had been shut off. You’ll be amazed!

Because of the clear positive results of music therapy for dementia, various charitable foundations now provide iPods to the elderly. More senior homes are providing musical therapists to relieve the mental and emotional anguish that comes with dementia and Alzheimer’s.

Music Can Give Life To Those With Dementia or Alzheimer’s

“There are certain areas of the brain that are still relatively intact even as a progressive disease like Alzheimer’s takes effect. In particular, the limbic system. And specifically, the hippocampus, which retains long-term memory and has retained emotional impact. Music triggers these long-term memories. So, we see people who have not spoken in years begin to sing songs that they knew in their early teens and early adulthood.”

Music is an expression of humanity and is, in and of itself, healing. It’s something we all understand and something we are all touched by. It is both food for the brain and healing for the heart.